Originally the location of horse stables for a client of Luis Barragán, Mexico’s most well-known modern architect, Tetetlán, a Mexico City restaurant specializing in local ingredients, is the result of an extensive remodeling effort by an art collector.

Although a bit snobbish, I was quite taken by the combination of the emphasis on local ingredients — for instance, some of the greens on the avocado pizza were grown at Xochimilco, an ancient irrigation system — as well as Tetetlán’s architecture.

If you’d like to experience it before you experience, watch my quick review of Tetetlán:

As I mentioned in the latest post, Mexico City is one of my favorite cities in the world.  And how might a city enter that hall of fame?

Having good food is a start.

I’d like to share with you a few highlights from a recent trip to the world’s largest Spanish-speaking city, in what I hope will become a series documenting Mexico’s variegated cuisines.

But before we dive in, we might want to consider…

“The Vaccine.”  What an unusually timely name for a restaurant.  Though, I’d say for eating out on the town, washing up with soap with suffice.

Green chorizo, what?!  Yes, chorizo verde was something I only discovered at a brunch buffet two years ago in the Mexican capital.  Hailing from the city of Toluca in the state of Mexico (which surrounds Mexico City on three sides), chorizo verde consists of pork, and mix of herbs, spices, and chilies.  Standard chorizo – the reddish one given a smokiness by the cayenne pepper (pimentón)  – is quite filling, so the green version allows one to…eat even more.  That’s my experience, anyway!

Chorizo verde is not one of the more common street food options, but keep a look out for it if you want an herbal, slightly lighter take on its Iberian cousin.

Having consumed just two tacos for the day, I was still feeling peckish.  Enter, one of the best food stalls I’ve seen in Mexico City, nay anywhere, in the Colonia Juárez district.

It’s easy to get distracted by the deliciousness surrounding you in a place like Mexico, yet even in that lofty position, there exist stand-outs:

On the comal – a flat griddle (historically made of clay) used for centuries in Mexico -these three chefs had chorizo, campechano (a mix of beef and pork of various cuts), suadero (fried beef), carnitas (shredded pork shoulder braised in its own fat), something akin to a burger, papas (potatoes), and nopales, or cactus.  What really sold me was the “fixins’ bar” of condiments– guajillo salsa, tomatillo salsa, beans, avocado tomatillo salsa, guacamole (!), pickled carrots, onions and cilantro, and a bevy of Veracruz limes.  Wow.

What did I order? 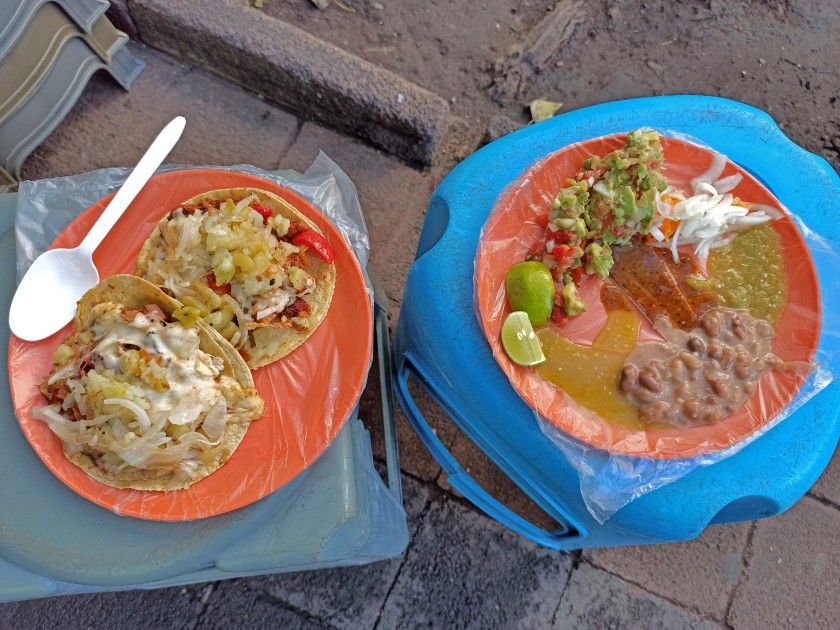 Two chorizo tacos with melted queso para asar (grilling cheese), potatoes, and onions, and a plate of the fun stuff.  Naturally, by the time I was finished chowing everything down, I had two more plates of salsa, and three more tacos.

Time for a drink break. 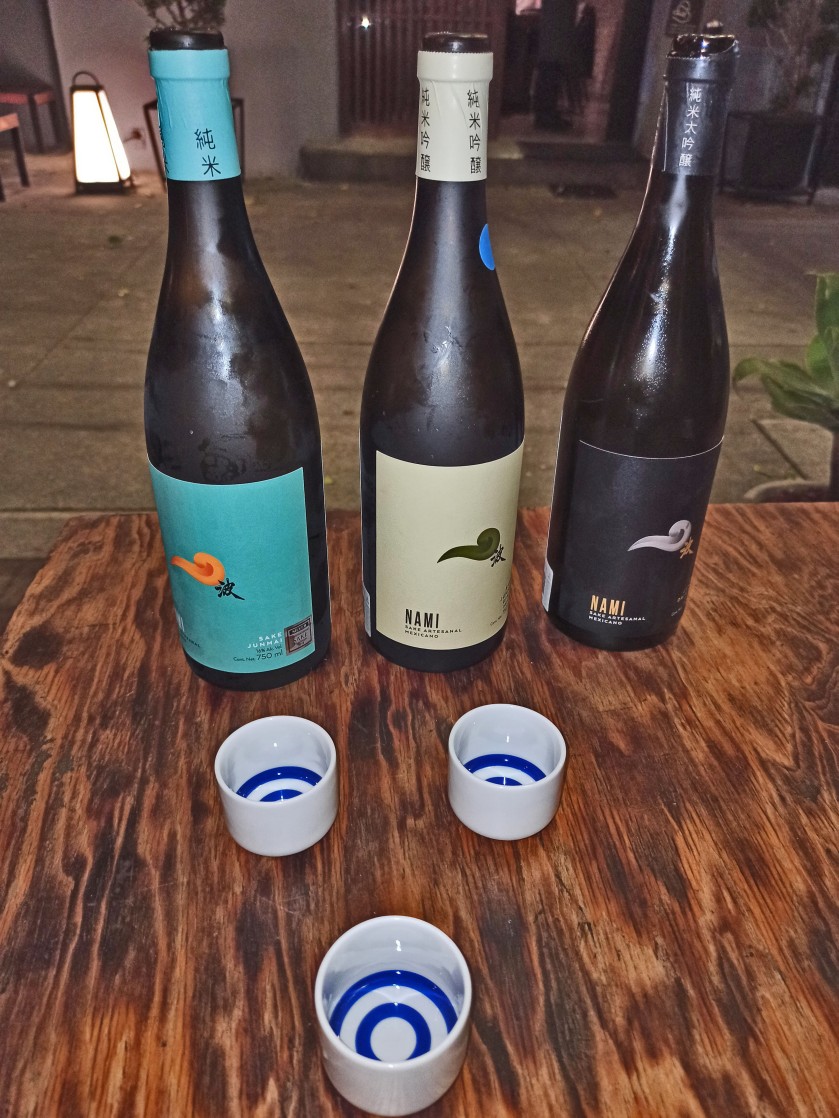 I sample the junmai and the daiginjou at Hiyoko, a modern yakitori restaurant in what has become the capital’s de facto Japanese barrio (neighborhood).

To top off my first review of Mexico City eats, I bring you la Señora Torres (named after the restaurant owner):

Basically, I was searching in Spanish for popular restaurants in Mexico City, and came across Mi Compa Chava (My Pal Chava), a relative newcomer in the chic Roma Norte section of town.  It’s a seafood restaurant focusing on fresh catches from Sinaloa, the same state where the sake originated.

It’s also the home of that unbelieavable tower (torre coincidentally means “tower” in Spanish) of seafood, as shown above and below… 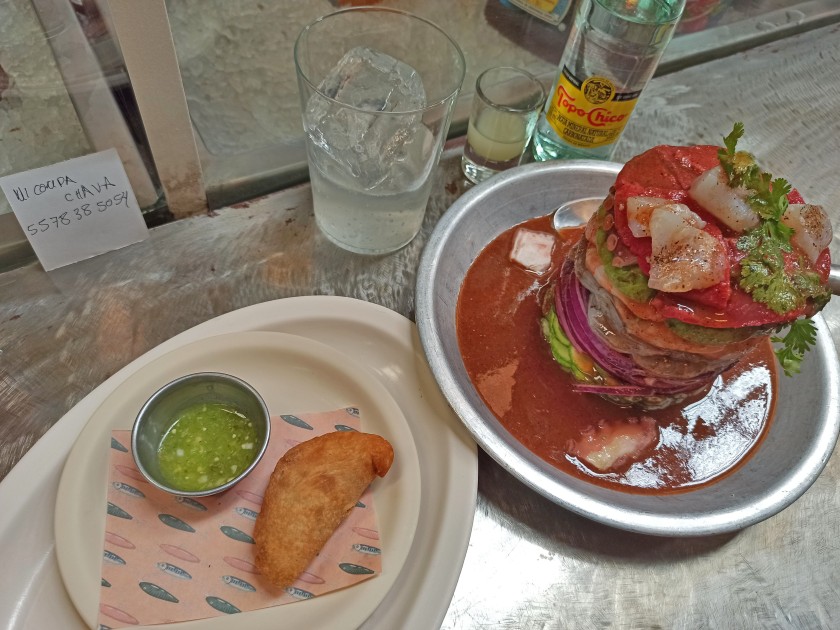 The edible skyscraper had layers of octopus, raw shrimp, cooked shrimp, cucumber, yellow fin tuna, red onion, avocado, and callo de hacha (scallops). Upon serving the tower, the waiter poured a blend of lime juice, charred tomatoes, Morita chilies, and a house salsa over it, returning the seafood back “to the sea.” Actually, that’s just my take on things.

The dish was a delight to conquer, and showed how fresh each ingredient could taste, in spite of being a couple of hours flight time from the Sinaloa port of Los Mochis (Mexico City is, after all the home of the largest seafood market in the country, and the largest wholesale food market in the world).

What’s that you say?  You want to see more of Mexican gastronomy?  Perhaps a churro, some tacos al pastor, or even a tour of the retail section of the wholesale food market?

I think that can be arranged.

Mexico City is thus far, one of my favorite cities in the world.  It has some precious architecture, both classical and modern, the temperatures are great, and the food.

Today’s pick comes to us from the Renacimiento neighborhood of the Mexican capital, close to the city’s main boulevard, Paseo de la Reforma.  After a mostly filling lunch of quesadillas, I was still hankering for a botana, or snack.

Randomly, I had passed by a restaurant called Casa Kun; on its menu was a dish of octopus prepared in peanut sauce.  I was not peckish enough for that, but given that the menu sounded delicious, I did a search online for meal recommendations.

That’s when I found out about the squid hot dog, or hot dog/jocho de calamar.

I’ve had my share of mystery meat hot dogs, and even an eel dog in Tokyo, so there was no way I could turn this one down.

If you’re sensitive to “fishy” tastes, then the calamari hot dog would not offend you.  You are able to enjoy the flavor of the squid, the house-made mayonnaise, and the surprisingly tasty bun without any one flavor overpowering the others.  It was served with fried baby octopus, roasted potatoes with scallions, and chile de árbol salsa.

Want to watch me try the calamari hot dog for the first time?  Check out my YouTube.