A few years ago, I took a road trip with some friends around southeastern Mexico, starting and ending in Orizaba, Veracruz, ultimately getting as far as Cancun.  As I may have mentioned before, Mexico – thus far – is one of my top three countries for eating…thus, I was not only looking forward to exploring more of the country with locals, but also to trying new and familiar foods along the way.

For instance, there’s chocolate.  I’ve wondered why Mexican chocolate doesn’t get much attention around the world, in spite of being the ancestral home of Theobroma cacao, the Latin name for the original cacao tree.  Of course, colonial empires and globalization have played a role in spreading the harvesting of cacao throughout many tropical countries, namely the Ivory Coast, Venezuela, and Ecuador.

Fast forward to my road trip, and the city of Mérida, located in the state of Yucatan.  Although counting nearly one million inhabitants in its metro area, its downtown area has a cozy feel to it.  Mérida is hot year-round, has boulevards lined with mansions built almost entirely thanks to rope, and owing to Mayan tradition, unique foods found nowhere else in Mexico.

Plus, due to its recognition as being one of the safest cities in the country and with that, a sizable expat population, they’ve got some fine places eat and drink.  Places like Ki’XOCOLATL, a small chocolate shop adjacent to Santa Lucia Park.

Though there are some debates as to the origins of the word chocolate, it no doubt stems from Nahuatl, a language spoken for centuries in rural parts of central Mexico; xocolia means “to make bitter,” and atl refers to “water.”

When it was first discovered nearly 4000 years ago by pre-Olmec cultures, it was consumed in its naturally bitter state, ground into a paste with water.  Subsequent civilizations started to add in what was organically found at the time in Mexican jungles and rain forests, namely honey, chilies, and vanilla.

After a long stroll through downtown Merida, I wanted to sit down and relax with some sweets.  Ki’XOCOLATL offered hot chocolate, two ways, I as I deem it.  The first method was the contemporary style, sweetened with sugar.  The latter, evoking how Olmecs and Mayans may have enjoyed it, started off by merely being the bitter cacao seed heated up with water.  The waiter served it alongside honey, brown sugar, achiote – a yellow-orange seed typically used to add color to foods, allspice, habanero, and cinnamon, although cinnamon hails from Sri Lanka.

Although the ancient hot chocolate took a bit of getting used to, I admit that the modern one was the best cup of it I have ever tried.

Where did you have your favorite cup of hot chocolate?  Whether it was in Mexico or somewhere else, let me know!

When much of the world thinks of Chinese food, do bread, dairy and dessert often come to mind?  I’m not even referring to ingredients or dishes from hundreds or thousands of years ago, or Chinese restaurant kitchens adapted to local tastes.

My introduction to 馒头 (mán​tou), steamed wheat bread originally from northern China, is actually one of my fondest food memories.  In 2004 I visited Singapore with my dad, and a couple of natives invited us to try chili crab.  Not only was the crab delicious – but it was equally fun to sop up the chili sauce with fried mantou.

It’s easy to satisfy salty and umami cravings in China, but what if wanted to grab me somethin’ sweet?

From having lived all over Shenzhen, China – a city built by and on internal migration – I had come to get familiar with menus from regional Chinese cuisines.  However, based on those experiences, there seemed to be no better way to conclude a meal drowned in reused cooking oil and loaded with MSG than by getting served A) sliced tomatoes covered in granulated sugar, B) caramelized potatoes that will singe your mouth or C) durian anything. 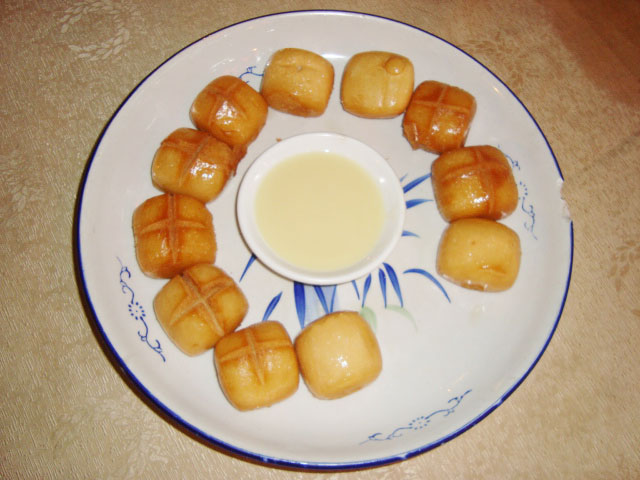 Have you tried this combo before?  If you’re really looking to overdo it, order it with can of root beer.

Turkey — my mistake, Türkiye — is one of my food paradises. I find the broader Turkish cuisine to successfully check off just about every box on the list, from grilled foods and dairy to stews and dessert. And for dessert and pastry in particular, I’ve got a major weakness for baklava.

Recently, I was the southeastern Anatolian city of Gaziantep, the baklava — and pistachio, called fıstık (fuh-stuk) — capital of Turkey. Although there wasn’t much of a variety of baklava, the choices that were available were of course, quality; not to mention, along the busy downtown street of Karagöz Caddesi, you will find no less than 12 baklava shops, so grab a container of milk and start the gluttony!

But what if I told you that baklava has a less well-known cousin (at least, outside of Turkey and Azerbaijan), an even more decadent, larger-than-a-crêpe phyllo pastry that counts kaymak (clotted cream, traditionally made with water buffalo’s milk), butter, pistachios, and sugar as its main ingredients?

Having only found out about katmer while researching things to do in Gaziantep, I was floored by the description– phyllo dough stretched out like a pizza, filled with kaymak and pistachios, then baked in an oven? ¡Asu madre!

The one place I read about, tucked away in the old town, was called Katmerci Zekeriya Usta (usta means expert, and in this case, I’d say it’s an apt description).  As the home of katmer, Gaziantep has more than a few places to try it, but I’d start with Katmerci Zekeriya Usta. It’s typically served for breakfast — given how heavy katmer is, it makes sense — and in that region of Turkey, is given to newlyweds to eat on their first morning of being married, with the intent of giving them a sweet life together.

For all of those Mexicophiles out there, you probably already know that the Día de Muertos (Day of the Dead) festival is approaching at the end of October.  In fact, it’s a days-long celebration, with lots of dancing, music, and face-painters, all in honor of the dead that return for a brief period to be with their relatives.

However, it was the Spanish conquistadors that shifted the festivities to coincide with Halloween (aka All Saints Day, a day of Catholic remembrance of the deceased).

Originally, the Aztecs celebrated their “great feast of the dead” (called Xocotlhuetzi) in present-day July/August, offering to their deities seasonal native crops such as beans, corn, and pumpkin.  The pumpkin -more commonly known as Cushaw squash and specifically Cucurbita argyrosperma (from Latin, “silver-seeded gourd”), was at that time prepared with honey in a fire pit.

When the Spanish Queen Isabel of Castile (Castilla) tried the pumpkin for the first time, it became a hit, even adopting one of her titles as its name– calabaza de castilla.

Isabel…that name sounds familiar.  In short, she was the queen of Spain when Columbus set sail for the western Atlantic.  Along with Spanish marauders, Columbus took sugar cane to the Caribbean, which eventually made it to Mexico in the early 1500s. Now that we’ve got our two main ingredients, let’s explore the dessert du jour, calabaza en tacha.

Whereas calabaza refers to pumpkin, the tacha is a bit more confusing.  Formally, tacha means blemish, or tack (as in thumbtack).  To get more esoteric, a tacha is another name for a pot that is used to boil certain foods.

Water and cinnamon (cinnamon is actually from Sri Lanka) are first boiled in the pot, then a heaving mass of piloncillo (unrefined brown sugar) gets added. Thereafter, the only must is the pumpkin, and typically its seeds.  The version I tried, at the Mercado de San Juan in Mexico City, was a real treat, counting sweet potato (camote) and guava (guayaba) as bonuses.  Cloves are often added near the end of the preparation.

Calabaza de tacha is a delicious blend of autumnal, international, and tropical flavors with a touch of local history that helps keep Mexico among my top spots for culinary travels.

Background: Apparently, rasgulla is one of the oldest Indian desserts, arguably created in either Odisha or West Bengal (two present-day Indian states). According to legend, it was frequently used as an offering to Lakshmi, the Hindu goddess of wealth and prosperity.

Verdict: Rasgulla is one of the more approachable Indian sweets.  Although it is soaked in sugar, I feel that the lemon juice and maida helped reduce the sugar’s potency.  Sometimes cardamom and/or rose water are added, as well as pistachios, though the latter serves more as a garnish.  Still, upon looking at that giant bowl of sugar syrup, how could you not want to go bobbing for rasgulla?

Kawagoe (川越), a roughly 30-60 minute ride from major train stations throughout Tokyo, is also known affectionately known as Koedo (小江戸/Little Edo), whereas Edo refers to Tokyo’s former name.  As Kawagoe made it through World War II only receiving minor damage, many of its most famous structures, the 蔵造り (くらづくり/koora-zukoori), or warehouses, survived:

For that reason, it is one of the gems of Saitama prefecture, and one of the reasons that I visited.

Alas, there was another motivating factor for the short-haul north of Tokyo– the 芋 (いも/ee-mo) , or sweet potato.

That freaky fella above is called いもグラ (ee-mo gu-ra).  It is one of hundreds (seriously) of ゆるキャラ (yooroo kyara), or mascots designed for companies/tourism bureaus throughout Japan.  There are even annual competitions among said mascots; if you want to forego nightmares for some time, don’t click this link (in Japanese).

Kawagoe is one of the sweet potato centers of Japan; this was particularly important for the region during the war, as other foods were quite scarce, and more susceptible to pests/extremes in weather.

Although I referred to the character 芋 to refer to sweet potatoes, that character can also mean potato, or country bumpkin.  You see, the other part of Japan best known for sweet potatoes is present-day Kagoshima prefecture, on Kyushu island.  A section of that prefecture used to be called Satsuma, which begets another way to say sweet potato, 薩摩芋 (さつま・いも/satsuma ee-mo).  More still, loanword enthusiasts would appreciate the term スイートポテト , which literally reads “suii-to poteyto. 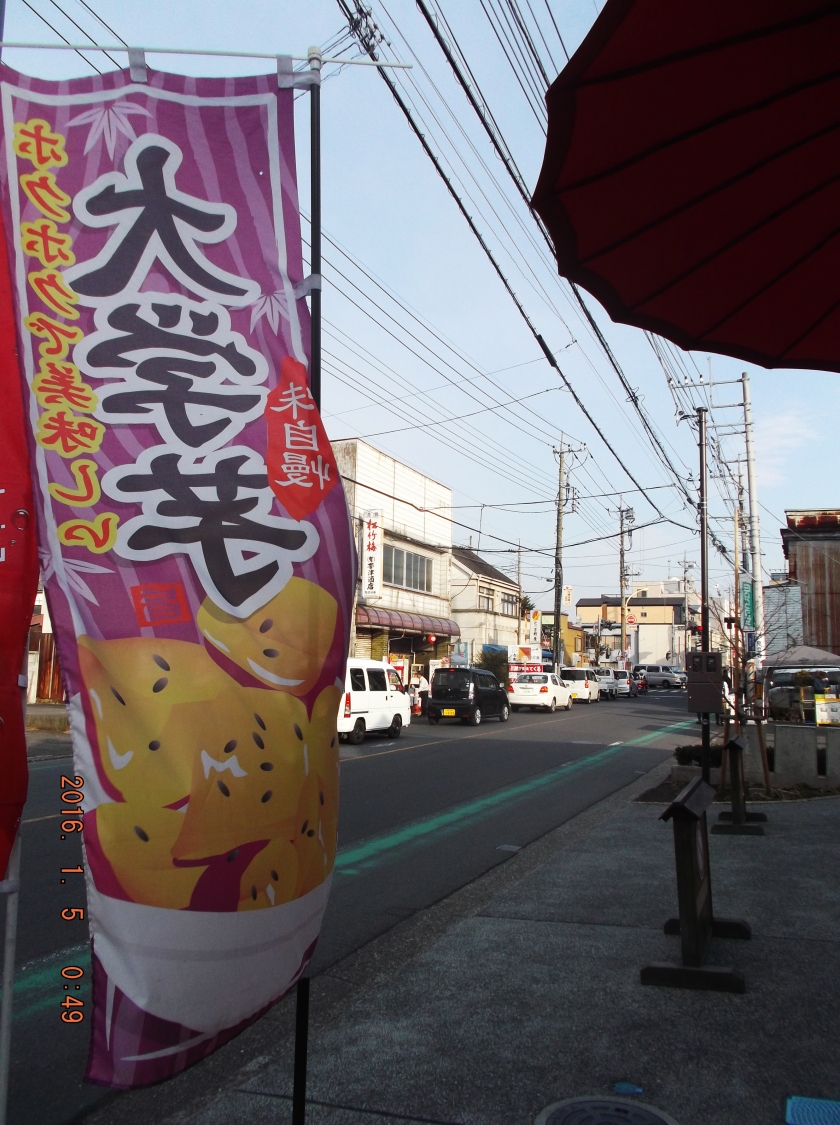 Stroll through Kawagoe, and you’re bound to come across numerous food shops and souvenir stores vending this hardy tuber; sweet potato noodles, a sweet potato-centric set menu, desserts, ice cream, candies, and who knows what else?

Fortuitously, I found one of my favorite sweet potato snacks, daigaku imo (大学芋/ dai-gakoo ee-mo).  It means college potato, and is made of caramelized sweet potato sprinkled with black sesame seeds.  The sign showing its name is written in Japanese above, and the dish itself is photographed below: 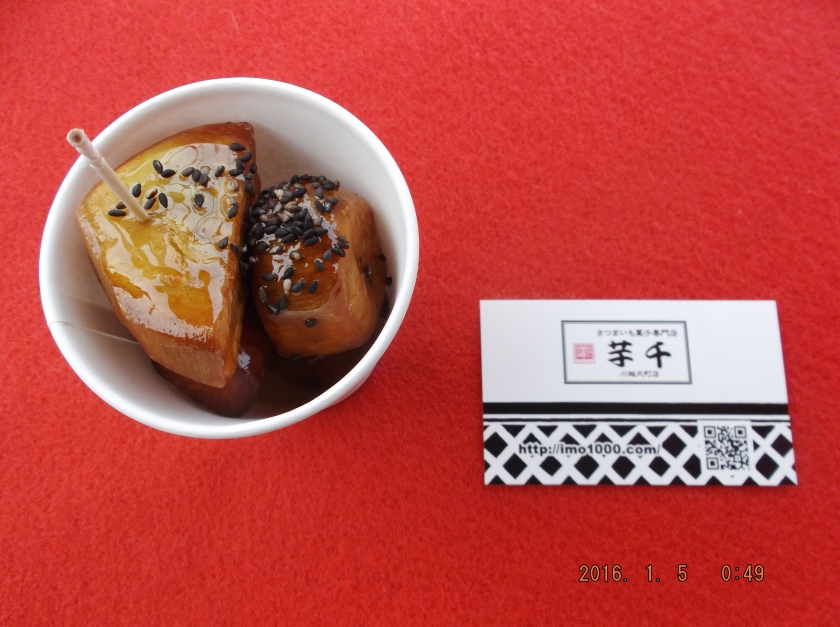 My time in Kawagoe was rather limited – if judged solely by the food I didn’t get to try – so I must revisit.  That said, here are a couple more delights sampled on that day:

Grilled sweet potato-coated karintou (花林糖・かりんとう).  Karintou are sweet, deep-fried  snacks made of flour, yeast, and often brown sugar.  Though they often look like things you’d find crawling across the floor, to me, they’re delicious.

Termites!  No, no.  Actually, these いもかりんとう饅頭/まんじゅう (ee-mo karintoh-man-juu) were excellent.  Manjuu are typically made with rice powder, flour, buckwheat, and red beans (adzuki), but these used burdock and carrot powder for the outside, and sweet potatoes inside.

Are you as big of a fan of sweet potatoes as I am?